Lincoln Elementary gets annex over other schools 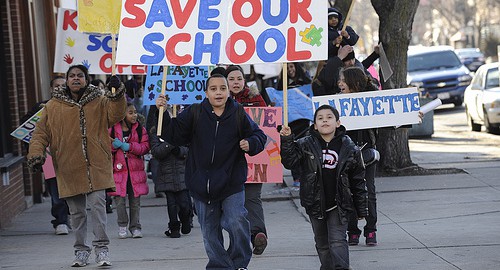 The controversial $20 million annex for affluent Lincoln Elementary continues to raise doubts about the fairness of CPS decisions amidst a year of unprecedented school closings and severe budget cuts.  Parents from other overcrowded schools complained about the lack of transparency in doling out facility funds as detailed in Catalyst Chicago’s “Race ‘elephant in the room’ with Lincoln overcrowding” and the Chicago Sun-Times article, “Parents: Lincoln Park school gets annex. Why not low-income areas?”  Many parents and community members are pointing to race and socio-economic status of the students as the true motivator behind many CPS decisions.

CPS Board President, David Vitale, responded to criticism with a statement that schools on the south and west sides had capital improvements for welcoming schools, as if the school closings actions were a plus for low-income schools.  CPS official Tim Cawley callously rejected moving Lincoln students to nearby schools with more space.  He stated that “it is highly disruptive to relocate people from their existing school to another school” disregarding the disruption that the recent closing of 50 public schools caused some 30,000 students and their families mostly from the south and west sides of the city.  Still, this constant refrain of racism and favoritism from communities and the media seems to point to broader acknowledgement of the inequalities in CPS policy, which perhaps was more starkly spelled out during last year’s school closing debate.  Even some Lincoln parents are showing solidarities by requesting that the annex funds go to schools in greater need.

24 responses to “Lincoln Elementary gets annex over other schools”