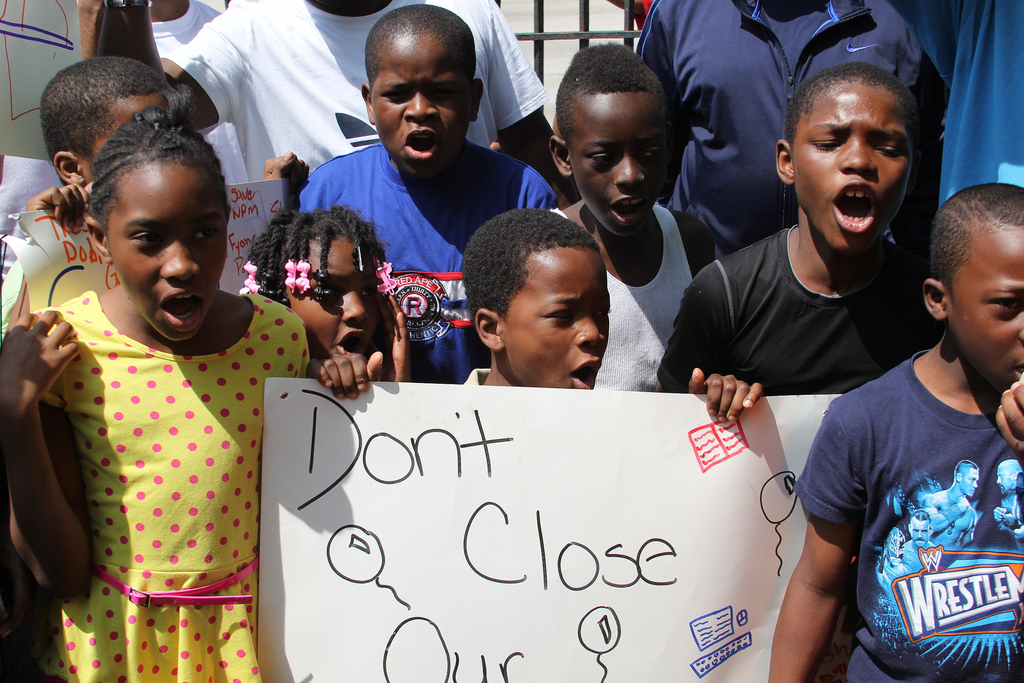 On March 21, 2014, CPS announced plans to turn over McNair, Dvorak and Gresham elementary schools to the turnaround operator, Academy of Urban School Leadership (AUSL). To be clear, turnarounds are a version of school closings in which the students stay in the building, but the school—its identity, culture, history, all staff—are wiped clean.

The three new schools will give AUSL a total of 32 schools concentrated on the West, Southwest, and South sides of the city. What does this mean? 1) AUSL has a bigger plan to have its own district, turning CPS into a portfolio district like New Orleans and Detroit. 2) This is essentially a sell-off of Black schools to a private operator, further disenfranchising African American parents and reducing the Black teaching force.  3) AUSL schools are not doing a better job of educating students. What public schools need is a community driven process of sustainable school transformation and the necessary resources to make it happen.

AUSL District—the Portfolio Model
Don Feinstein, Executive Director of AUSL, has made it clear AUSL’s goal is to have its own district in Chicago.

“It’s such a big district, with so many schools, that AUSL has a better shot of continuing to successfully manage the school. AUSL is currently formulating a plan to keep our turnaround schools for the long haul, and turning ourselves into a district within a district of sorts.”[i]

AUSL already operates its own CPS Network. More AUSL turnarounds signal a closer step to Feinstein’s goal—a separate AUSL school district in Chicago. This would chop up CPS and turn it into the education market model of a portfolio district[ii] as in New Orleans and Detroit where some schools are run by the district, others by an independent body not governed by the school board, others by charter operators. Even if Chicagoans are able to win an elected school board, a step Chicagoans have indicated they want, the AUSL district would not be governed by it. This portfolio district disenfranchises parents and community members, removing schools from any sort of public governance or decision-making while still using public dollars to fund them.

CPS Is Selling Off African American Schools to AUSL
The proposed turnarounds serve almost entirely African American students. Overall AUSL has a higher proportion of Black students than the district (74% Black compared with 40% Black in CPS overall). The three additional schools would give AUSL even more African American students. Based on AUSL past practice, the majority of the schools’ Black and experienced teachers will not be rehired. AUSL schools have a higher average proportion of White teachers compared to CPS overall and substantially lower number of years of teaching experience.  More AUSL turnarounds would mean the loss of even more Black teachers –the district has gone from 40% Black teachers in 2000 to 25% in 2012.  Having fewer Black and veteran teachers undermines teaching.  New teachers need the mentorship of veterans, and Black teachers are more likely to understand African American students’ communities, build relationships with their families, and teach in culturally responsive ways.

AUSL schools are not better
Even though AUSL gets extra money from the district and the Gates Foundation, their schools are not providing an excellent education. Their academic achievement is uneven.[iii]  A 2012 Designs for Change study found AUSL schools lagged behind comparable CPS neighborhood schools with strong Local School Councils, despite having an additional average investment of at least $7 million per school over five years.[iv]

AUSL Network schools suspend more students than any other CPS Network.[v] School suspensions and expulsions and their link to the school to prison pipeline are under challenge by the U.S. Justice Department and community groups around the country.

What Students and Families Deserve
The students at McNair, Dvorak and Gresham deserve an intellectually rich, holistic, culturally relevant, supportive and caring, research-based, fully resourced learning environment.[vi] This can be achieved by a community-driven process of school transformation[vii] in partnership with committed educators and full funding and support from CPS. This is entirely possible.  All that is needed is political will.

The families, teachers, and school communities deserve a voice in decisions that affect them. This turnaround plan by CPS, after the historic closing of 50 schools, reinforces the need for democracy in CPS decision-making.  A first step would be an elected school board representative of CPS students.

[i] From Ed.gov, 2007, “U.S. Department of Education interview with Don Feinstein, Executive Director of AUSL.” Retrieved from  http://www.ed.gov/oese-news/ausl-chicago.